Many people think of bicycles in terms of sport or recreation; as a means to participate in road or off-road funrides, or simply to get fit and healthy. But the bicycle is the ideal vehicle for transportation, especially for short trips to the school, shop or work. After much research, PPA and BEN launched the ‘Bike4All’ bicycle. This is a robust, single-speed utility bicycle and comes with mud guards, a carrier and side stand.

This sturdy bicycle is already proving to be popular with commuters and utility cyclists alike in the greater Cape Town area, including Hout Bay, Masiphumelele, Ocean View, the Tankwa Karoo, Barrydale and Grabouw, as well as further afield.

“With the launch of the Bike4All, PPA continues to deliver on its mandate to put more people on bicycles,” says PPA CEO Robert Vogel. “To date, we have been fortunate in that funding received from the Cape Town Cycle Tour allowed us to donate some 40 bicycles to schools and charities where these visible red-and-yellow bicycles will assist their new owners to get to school or work. Some 100 bicycles have also been bought by Pedals for Peace. Some of these will be donated back to the Bike4All programme after the Africa Burn Festival, from where these bicycles will be re-distributed to recipients along the Kommetjie Corridor.”

Shortly after the launch of the Bike4All programme, Qhubeka joined the initiative, matching the contribution from PPA and BEN with Qhubeka bicycles. The three organisations are united by their efforts to promote bicycle use in South Africa, working together to increase their impact and reach.

“This exciting Bike4All programme is all about mobility and opportunity,” added Tim Mosdell, General Manager for the Bicycling Empowerment Network. “These bicycles will save commuters money, which can be used to pay for education, or groceries.” 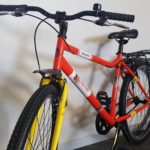 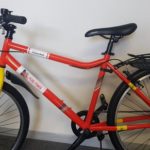 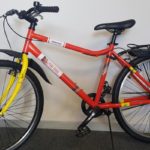 These sturdy bicycles can be bought for R2000 each from the Pedal Power Association and BEN. Why not buy one for yourself, or an employee or friend? Contributions towards bicycles are also gratefully received.
BUY NOW

The Bike4All Project was launched with our sturdy and reliable utility bicycle. But even at 16″, these bicycles are generally too big for young kids, and where better to foster a culture of riding your bicycle than starting with the youngsters?

So we’ve ordered a container of Bike4All BMX bicycles, and we are very excited that some 500 BMX bicycles will be available in Cape Town from end-November 2017.

These these fun BMX bicycles will give us the opportunity to distribute more bicycles to kids. At the same time, we’ll teach the youngsters all about being a COOL KID ON A BIKE and what they need to do to ride their bicycles in a safe and responsible manner – while having loads of fun. 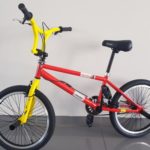 You can buy a BMX Bike4All for R1800, including a helmet and VAT (excluding transport).
BUY NOW