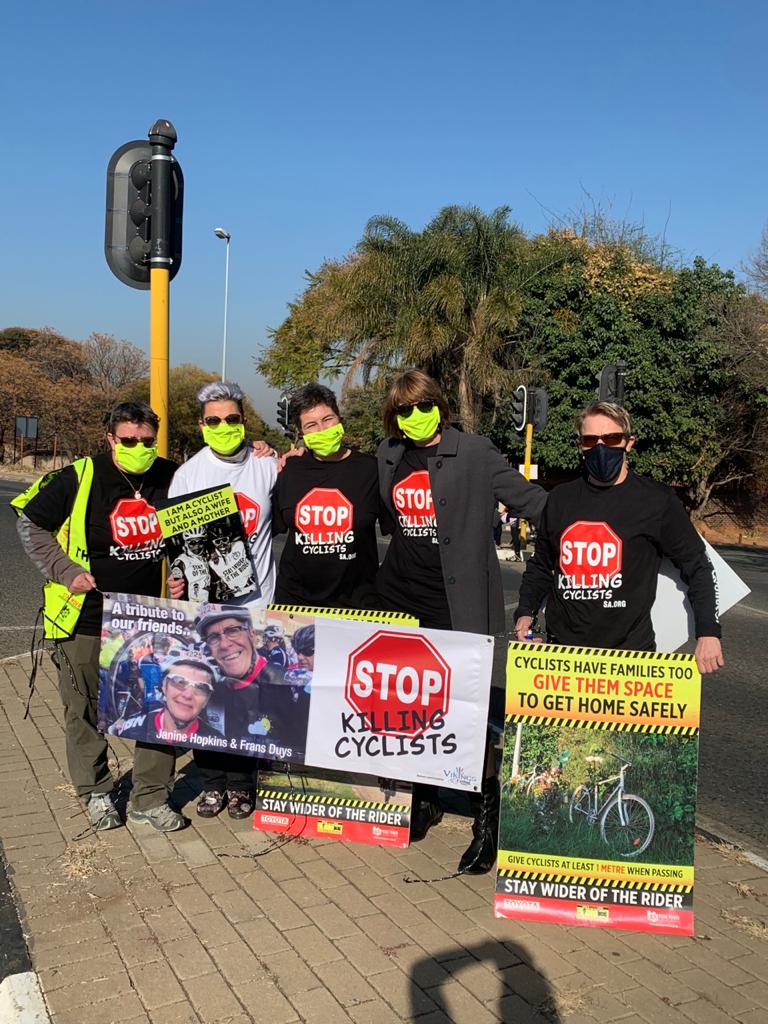 Posted at 2:50 PM in Pedal Power, Safe Cycling by PedalPower

The PPA supported action group  ‘Stop Killing Cyclists SA Org’  , which  staged a silent protest outside the Randburg Magistrate’s Court on Wednesday 29 July, in protest against the senseless deaths of cyclists on South African roads.

A driver, who allegedly struck and killed a cyclist on the pavement of Uranium Road in Fourways, Johannesburg, on 11 June, dragging him some 30m down the road, was granted bail of R8 000 in the Randburg Magistrate’s Court on 15 June. On Wednesday 29 July Ishe Davani briefly appeared in court again. The case was postponed until 30 October for further investigation. The cyclist, 37-year-old Steve Preston, an IT executive from Johannesburg, died while trapped under the man’s BMW.

According to Sean Badenhorst from Tread Mountain Biking, Preston’s family was fragile during the court procedure but encouraged by the magistrate’s attitude towards the case. Dawn Burnett, a founder member of ‘ Stop Killing Cyclists SA Org’, who lost her life partner in a cycling crash, said that the organisation felt that they had to protest against the lack of respect for the lives of cyclists lost on our roads. Burnett said that the taxi driver who allegedly caused the accident in which tandem duo, Frans Duys and Janine Hopkins were killed in November 2019 in Isando, has still not been charged.

In less than ten days two cyclists have been killed. Last week in Durban, Ralph Harris was killed when a bus collided with him along Jan Smuts Drive in Durban. The driver has been charged with reckless driving.  On the same day as the court case, yet another young cyclist, Jeffrey Jantjes, was killed on Baden Powell Drive, close to Strandfontein in the Western Cape by an eighteen wheeler truck which attempted to pass without  giving him sufficient space, resulting in yet another  tragic loss of life. No charge has been brought against the driver as yet, as the accident is still under investigation.

Our condolences go out to their family and friends. Too many cyclists lose their lives on the roads in South Africa due to reckless driving or by motorists driving under the influence of alcohol. What is also a real concern to us, is the amount of time it takes for cases to get to court and that many cases are often dismissed due to lack of evidence or improper investigation.