CYCLING SAFETY AHEAD OF THE FESTIVE SEASON – SHARING THE ROAD RESPONSIBLY 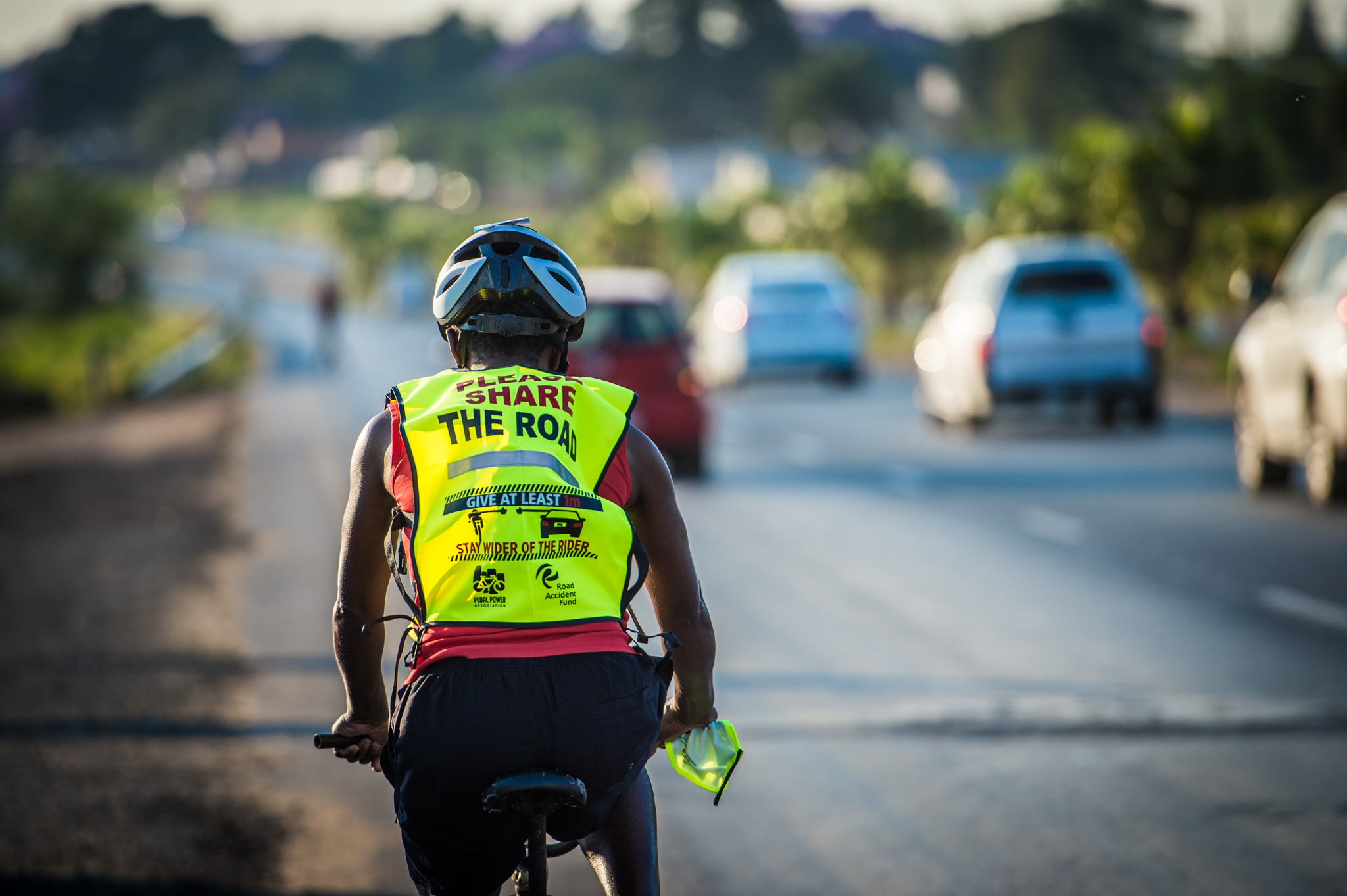 Posted at 4:00 PM in Pedal Power, Safe Cycling by PedalPower

The festive season is here which usually means an increase of the number of cyclists on the road. Cycling is one of the most affordable means of transport and great for exercising and is becoming more and more popular so there are many more cyclists out there especially at this time of the year. Emphasizing that “Cycling is part of the solution” as a mode of transport in South Africa, the PPA “Stay Wider of the Rider” campaign is reminding drivers and cyclists to take preventative steps to avoid collisions. In South Africa, bicycles are considered legal vehicles and are bound to the same laws, and courtesy as motor vehicles. “The road is a shared space where all road users have rights and responsibilities” explains chairman of the Pedal Power Association, Steve Hayward.

For drivers, the key message is “give cyclists space when passing them or wait until you can do so safely”.

Remembering that your car is a heavy piece of machinery and that cyclists (and pedestrians) are extremely vulnerable motorists can avoid injuring cyclists by practising the following:

·         Always be aware of your surroundings and be on the lookout for cyclists;

·         When passing a cyclist, please give them at least a one metre berth, but preferably as much room as you would give a car. Cyclists cannot keep too far left as it becomes dangerous and they may need to swerve to avoid hazards in the road. Always anticipate that there may be a pothole, an oily or wet patch, glass or some other obstruction in the cyclist’s path that you cannot see;

·         If you are towing a trailer or caravan remember to give extra room when passing a cyclist and don’t cut in too early;

·         Don’t drive too closely behind a cyclist – you may not be able to stop in time if they come off their bike or do something abruptly. If the road is narrow and you want to pass, rather slow down and wait until there is enough room;

·         Be particularly vigilant if you see there are children riding bikes – they may do something unexpected;

·         When making a left turn, remember that there could be a cyclist coming up behind you  who is proceeding straight. Double check that there are no cyclists before making the turn;

·         If you are turning right and there is a cyclist approaching you in the opposite lane do not underestimate their speed. A cyclist can ride at up to 40km per hour so rather pause a moment and let the cyclist through safely;

·         Avoid “dooring” a cyclist – check behind you before opening your door to exit your car.  Also remind your children to do the same;

·         Do not park or stop in cycle lanes, it puts cyclists in even more danger when they move around your vehicle;

·         Drive slowly in restricted or low visibility conditions – remember that a cyclist could be around the next corner, so in residential areas, on rural roads or those with limited sight distance or low visibility slow down when you are not sure what is on the other side.

“With the spike of COVID cases along the Garden Route and Nelson Mandela Bay as well as areas in the Cape Metro, the Pedal Power Association encourages cyclists – novices and experts alike – to hit the trails and roads practising social distancing and adhering to wearing a mask or buff thus becoming part of the solution not the problem”, says Hayward. “Besides adhering to the COVID-19 regulations which are mandatory in South Africa under level 1 lockdown regulations, we also wish to appeal to cyclists to wear high visibility clothing and use bike lights at all times,” explains Hayward. “The PPA is very concerned about the high percentage of hit and run accidents caused by intoxicated drivers on the roads in the early hours of the morning, so we appeal to cyclists to be vigilant at all times and even more so  when approaching areas which have been identified as accident hot spots,” says Hayward.

For cyclists we recommend the following safe cycling tips:

·           Be visible: Wear bright clothes so that drivers can see you – anything neon is great during the daytime. It’s best to avoid biking  before sunrise and after sunset, but if you do go for a ride after dark, be sure to wear reflective gear and have lights. When turning, be sure to signal to drivers and make eye contact when possible. Cycle in a straight, predictable line so that you don’t take any drivers by surprise.

·           Check your bike: Before you head out, check your tyre pressure, lights and brakes to make sure everything is in order. This way there is less of a chance of some sort of malfunction that could jeopardize your safety.

·           Ride in groups if possible: More and more cases of muggings and bike jacking are reported to the PPA daily. Try to slot in with a local Whatsapp group for your own safety.

·           Be extra  vigilant when riding in the early hours of the morning as records show that most fatal incidents happen between 04:00 and 07:00 when drivers head home from a night out.

·           Always wear an ID bracelet when you are out cycling. Most of these have an emergency number to call should you need medical attention. It also makes it easier to contact your next of kin should you be out riding alone.

·           Always stay aware of your surroundings, riding with earphones is illegal and detracts from you being aware of what is happening around you.

“While encouraging cycling for recreational and commuting purposes, the safety of all cyclists is our main concern,” says Hayward. “By being proactive and sharing the road responsibly cyclists and drivers can all enjoy the great outdoors during the coming festive season. Courtesy comes free and leaves both parties feeling better. Acknowledge each other on the road and thank courteous behaviour,” Hayward concluded.